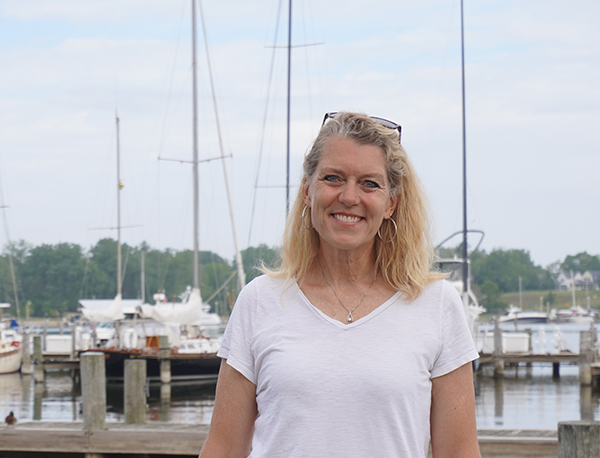 Marie joins us again for the 2021 season as our Acting Director! Having previously served a 6-year term as Director of the MBJA, Marie comes to us with a ton of experience. Not only that, but Marie is also a winning collegiate athlete and coach, a top women’s sailor and organizer in MBYC’s JY15 ladies racing programs, and in recent years, she campaigned her own Melges 24 in Holland-area races.

In the off-seasons, Marie has served as a Reading Specialist and kindergarten Teacher for the past 24 years in Holland and Orchard View Schools.

We are excited to have Marie back on our crew!

“Coach Ali,” as she’s known around the MBJA, has been a sailing instructor here for 5 years after completing her studies in Outdoor Education at Colorado Mountain College.

Ali is a regular Wednesday night crew on S2.79, Wolf Pack, and this summer, she plans to double-hand the Tripp and Queen’s Cup with another MBJA grad and former instructor, Lexi Petter. Ali is also involved with the Magenta Project, an organization dedicated “to developing pathways and generating opportunities for women in performance sailing,” and in 2019 was part of the first all-women crew to compete in the 5-day Rolex Middle Sea Race around the Italian island of Sicily.

We are thrilled to have Ali on our crew here at the MBJA and excited to see her grow into her new role as assistant director! 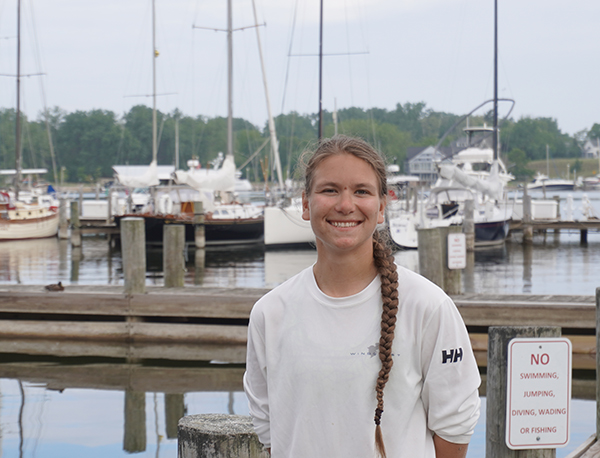 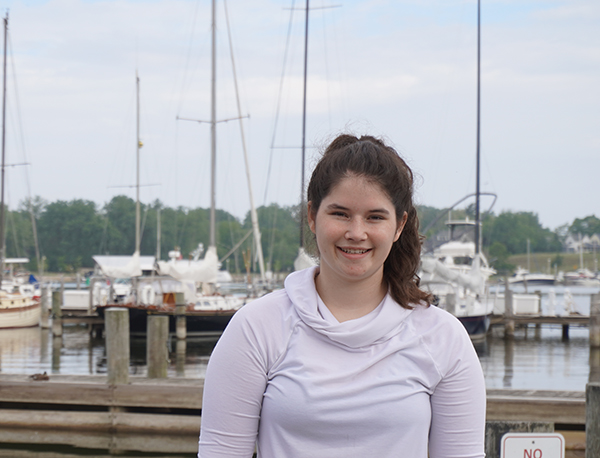 This is Sydney’s 4th summer coaching at MBJA and she has been sailing for 10 years! She is entering her sophomore year at Butler University.

Her favorite MBJA memory was, “a summer or two ago, we would take out the J22 and Kate (a past coach) would sit on the front of the boat with all of the kids and just tell sailing stories. They all loved it.”

Syndey’s most epic sailing experience was when, “I got 3rd place in a memorial regatta racing 420s with my sister. The person it was in honor of was a kid that we both loved who sadly passed and to be able to place 3rd in the 420 fleet meant a lot to both of us.”

“I just want to help kids find a love for sailing that my instructors helped me find growing up.” One of the most important life lessons Syndey learned from sailing is that, “things aren’t always going to go the way they want them to because you cannot control everything. You just have to keep going and it will all work out in the end.”

“Everyone that works at MBJA loves sailing and just wants to help the kids have fun and enjoy their time while also getting an educational experience.”

Eden has been coaching at MBJA for 2 years and started sailing 8 years ago because her dad had sailing lessons as a kid and thought it would be a great experience for her. It certainly has been!

She shared this memory from her early days: “When I was in Opti camp, we were sailing across the lake to the general store and I got stuck with someone who didn’t like sailing. She ended up leaving me to go with our coach. At first I was nervous to sail on my own, but coach said, ‘show me you can do it.’ And I did! It was cool for her to show her faith in me that way.”

Her most epic/crazy sailing experience was when “I went out in lasers with 3 other people. We knew there was a storm coming, but we went out the channel to get some upwind sailing drills in before it hit. The breeze picked up and it start to rain and thunder, so someone called the fire department to help us, but we told them we were fine. As soon as they left, one of the other lasers lost their outhaul and by the time we fixed it, we were too late, the cell was here. I was smaller than the others and couldn’t keep my boat upright, so I had to flip it and sit on my turtled boat to wait for the wind to die down.”

The biggest life lesson Eden has taken away from sailing is that “stuff happens. You just gotta embrace every moment and roll with it.” A note to future students based on an experience she witnessed with another student is, “don’t overeat before sailing, especially not pure sugar.”

Eden is planning to join the sailing team at Eckard College in the fall and she would love to sail in the Laser Worlds someday. 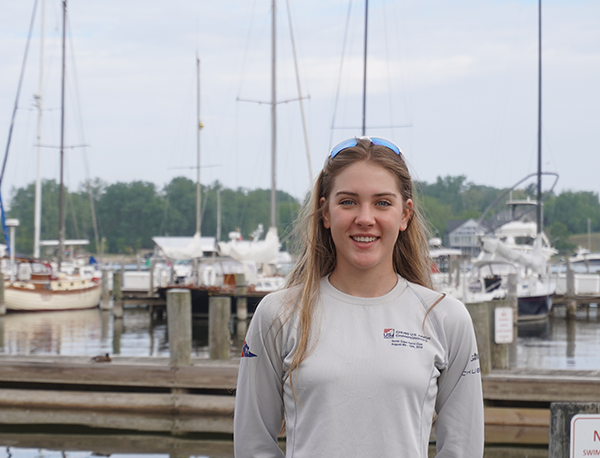 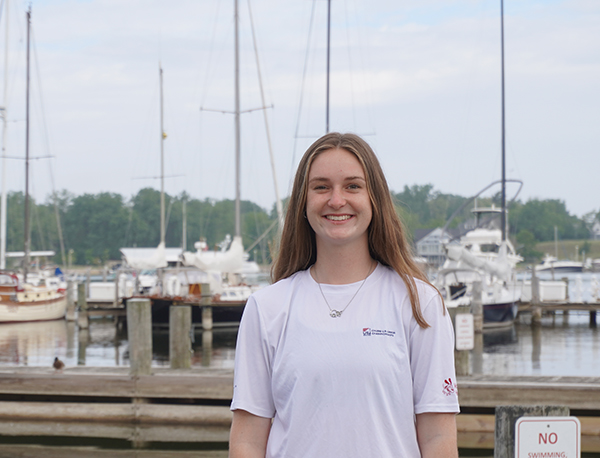 This will be Elizabeth’s first year coaching at MBJA, but she has been sailing for 10 years! “My first sailing lesson was at MBJA and it was where I fell in love with the sport!”

Elizabeth just finished her freshman year at Old Dominion University. She is on the sailing team there and competed in College Women’s and Laser Nationals this year.

“I hope to inspire and help kids fall in love with the sport as much as I did as well as help Old Dominion qualify for Women’s, Co-ed, and Team race nationals during the next three years.”

“[My] most epic sailing experience was College Laser Nationals this year in Newport. It was windy, wavy, and there was a whole lot of current!

“Sailing has taught be to always be prepared and able to adapt to new changes.”

Grace is a new MBJA coach, but she has 10 years of sailing experience. She is entering her Senior year at Hope College. Her favorite boat to sail is her Laser that was built in the 1960s! How cool is that?

Here is Grace’s inspiring MBJA story: “While sailing for Hope College at a very windy regatta… I capsized and death-rolled THREE times in one race and still beat 2 other teams in that race.”

Her most epic sailing experience: “It was a cold, cloudy day in June when Dad and I set out for our first race – the Double Handed from Muskegon to Port Washington. Storm clouds were approaching in the distance. We were pacing back and forth between the breakwater walls waiting for a lull in the 8 foot cresting waves to cross the starting line between lighthouses and enter into the roaring chaos of Lake Michigan. Our 30 ft Catalina sloshed in the waves, submerging our bow in feet of water as the boat dove into the trough of each relentless wave. I looked over at Dad and saw both exhilaration and apprehension in his smiling face. Dad and I were always ready for a story-worthy adventure, but this one seemed like it was about to be one of the craziest yet….”

Sailing life lessons from Grace, “For me, sailing is a tangible lesson in control and adjustment – just like most of life, you cannot control the wind but you can adjust your sails and your attitude.”

Her advice to future students is, “As a sailor who often knows much less about racing or sailing than any other sailor around me, I have found it helpful to remember I don’t need to be the best. I just need to be excited, confident, and having fun.” 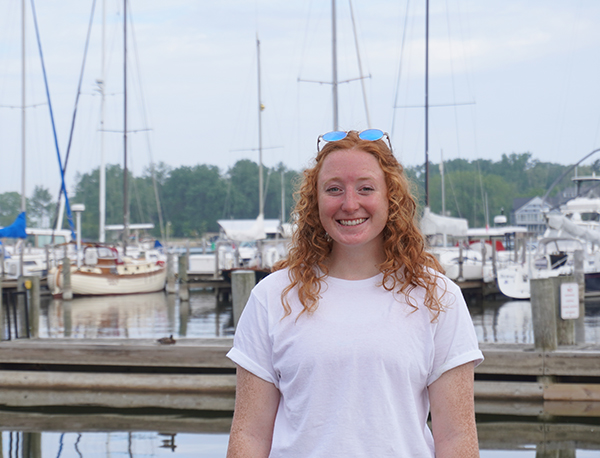 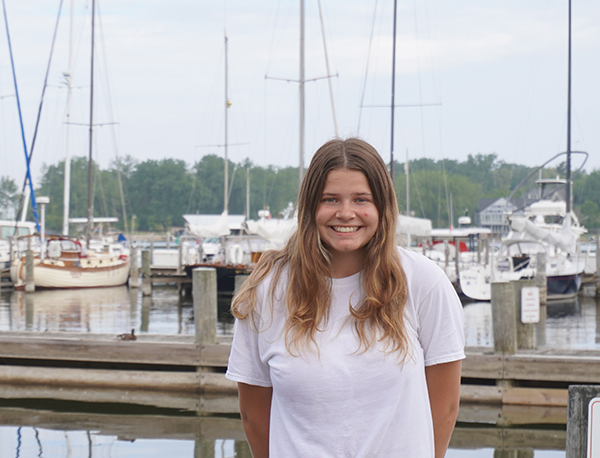 Lauren is another first year coach at MBJA. She does not come from a sailing family, but now has 3 years of sailing experience from racing with the Holland Christian team. She graduates this year and will be going to Indiana Wesleyan College in the fall.

One of her favorite MBJA memories was when, “Ali was joking about tackling me, but accidentally tripped and did in fact tackle me.”

Lauren’s most epic sailing experience was when, “I was sailing with Amelia at a regatta and it was super windy. We were having so much fun and being super loud. We were so loud and crazy that starboard boats were moving for us. I don’t know how we did in that regatta, but that’s the most fun I’ve ever had sailing and my most memorable regatta experience.”

Sailing has taught Lauren, “how to let things go. When I get hard on myself after a bad race, I usually sail bad the next race. Being able to move on from something bad and focus on what’s ahead, instead of what’s already happened, makes life a whole lot more enjoyable.”

Lauren wants future students to know that, “we have the best coaches ever. I learned everything I know about sailing from MBJA, but our coaches have had impacts on my life outside sailing.”

Alden has been sailing for 7 years on a variety of boats and races with the Black River Sailing team. This is his first year coaching.

His favorite MBJA memory was when, “there was one light air day during the summer a few years ago so all the race kids switched boats for the afternoon. The opti kids sailed 420s and lasers while the big kids crammed into optis. We even had a little race between us. I don’t think there was a person on the water that day who wasn’t smiling ear to ear.”

“The best experience I’ve had sailing was on a Sunday morning VX race. It was a cloudy day with 20-25 knot gusts, but a few boats decided to go out. The wind built in consistency as the day went on so my skipper and I just sent it on the downwind legs. Kite up, weight back, full hike, bow out of the water, then we were gone! Post-race analysis said we hit 20 kts of boat speed. It was pure bliss on that run, and I haven’t been able to top the feeling since. Perhaps the best part of it all was that nothing broke on any of the boats that day, not even in the extreme winds.”

Alden aspires to, “go to Chubb Nationals in the next 2 years while I’m still eligible. Winning the Gold Cup for Wednesday Night racing would be pretty sweet too. Last year we lost on our throw-outs, so I know we can do it, it’s just a matter of racing well.”

“Teamwork has been the biggest lesson I’ve learned from sailing by far. Sailing really forces you to learn how to communicate with others quickly and efficiently. It also takes a lot to build up a team environment among your crew whether it be high schoolers or club teammates, and I don’t think I would have learned those skills if it weren’t for sailing.” 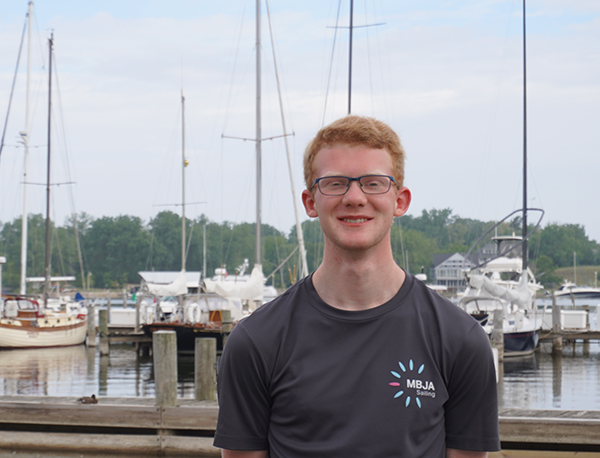 Learn More about our Donations and Fundraising. 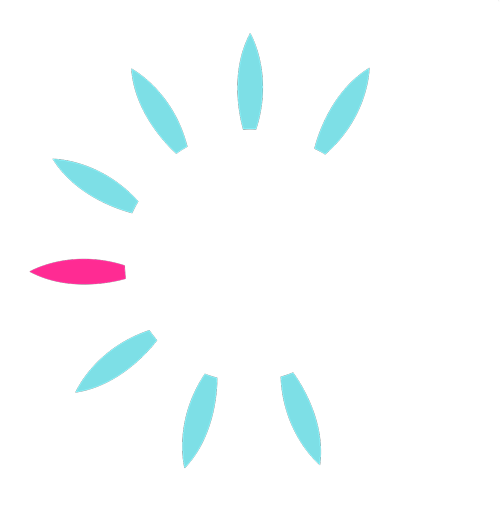 US Sailing
MBJA is a proud member of US Sailing.

Since 1982, the MBJA Sailing School has operated on the grounds of Macatawa Bay Yacht Club, serving the Holland community as a 501c(3) non-profit sailing school.

Since 1982, the MBJA Sailing School has operated on the grounds of Macatawa Bay Yacht Club, serving the Holland community as a 501c(3) non-profit sailing school.